Emirates Team New Zealand and INOES Britannia have announced details of the 37th America’s Cup, though a venue is yet to be confirmed

There has been a great deal of speculation as to where the 37th edition of the America’s Cup would be held, but this information (and a number of other specifics) is missing from the protocol.

Traditionally the Defender defends the trophy in their home country but wrangling over hosting costs and funding for the home team may potentially see Emirates Team New Zealand take their defence overseas.

It was widely rumoured ahead of this Protocol announcement that a venue was unlikely to be released so few will be surprised this has yet to be confirmed. However, there is now a timeline to that crucial information being shared, with 31 March 2022 now the official date by which this will be announced.

The 31 March deadline is also when the date of the next America’s Cup will be made public.

Defender Emirates Team New Zealand’s CEO Grant Dalton said: “As we saw with AC36, after 170 years, as the oldest trophy in international sport, the America’s Cup maintains its unique position of balancing the traditions of the Deed of Gift while continuing to push the boundaries of innovation, technology and design in the boats, the event, the broadcast and the commercial aspects of the event.

Maintaining this balance is the ongoing challenge and responsibility of the Defender and Challenger of Record as we aim to progress into the 37th edition of the America’s Cup in the ever-changing environment and demands of global sports as well as a determination to drive sustainability through innovation via hydrogen technology for the marine sector which we both believe is reflected in this Protocol.”

INEOS Britannia CEO and Team Principal Sir Ben Ainslie said: “As Challenger of Record, INEOS Britannia has sought with the Defender, Emirates Team New Zealand, to make the next America’s Cup less expensive and more inclusive. The Protocol this time around will see reduced team operating costs without compromising any of the technical development which the Cup is so famous for. There is an opportunity for change, so for AC37 we will see the first Women’s America’s Cup Regatta and we also welcome back the Youth America’s Cup.”

The AC75 from the last round of America’s Cup racing will be retained, though with a slightly modified ruleset. These changes should be small enough to allow for new challengers to buy an old generation AC75 and make it class legal. 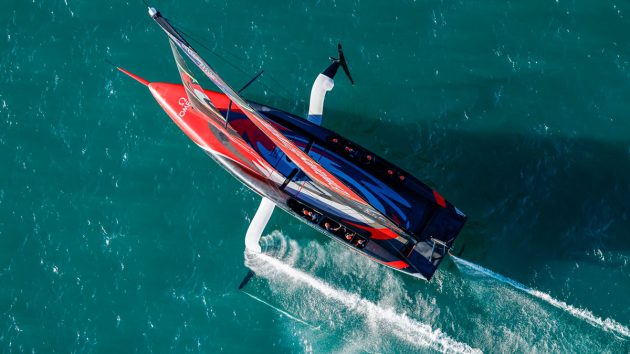 Elsewhere, there are the usual hopes to try to reign in costs with a list of actions all said to be targeting making the America’s Cup more affordable which include:

• Teams are only permitted to build one new AC75.
• Limitations on the quantity of foils and componentry that can be built for the AC75’s.
• Introduction of the multipurpose One Design AC40 class which teams will be able to convert and use for testing, component development and Match Race training.
• AC40 class will then be converted back to the measured One Design AC40 class for use in the exciting new America’s Cup Women’s Regatta and America’s Cup Youth events. These events have been developed to create new accelerated inclusive pathways into the America’s Cup for the growing global talent pool of female and youth sailors.
• Race crew onboard the AC75 reduced from 11 to 8 sailors.
• Further One design elements.
• Shared team recon.
• Supplied starting software.
• The AC75 class of boat will be maintained for the next two events.

Drive to Survive on the water

This concept is confirmed in the protocol, though only loosely stating that: With a view to opening the doors and the continued drive to increase the global audience of the America’s Cup and the sport of sailing, a condition of entry to competitors is they agree to be part of a potential behind-the-scenes documentary series. The intention of this is to bring the secrecy, the drama and all the teams’ personalities into the limelight.

If you enjoyed this….

Yachting World is the world’s leading magazine for bluewater cruisers and offshore sailors. Every month we have inspirational adventures and practical features to help you realise your sailing dreams.
Build your knowledge with a subscription delivered to your door. See our latest offers and save at least 30% off the cover price.

Cowes Live (formerly Cowes Radio) have been broadcasting at the heart of Cowes Week for over 30 years. We’re the longest running special event radio station in the world!

Every single competitor and all of the many thousands of spectators listen to Cowes Live – they will all hear your advertising message… it makes sense to advertise and reach new audiences! Contact us now for early-bird registration. Special rates for Island companies.

over 100,000 people tuned in to the Cowes Live commentary last year, through online TV and our FM radio and streaming services worldwide.

Get your business noticed.